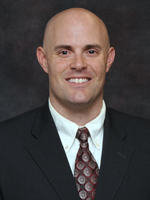 Completing his twelfth year as the Coordinator of Sports Performance at Salisbury University, Matt oversees the training programs of 21 varsity teams, 3 graduate assistants, and an intern and volunteer staff of about 15. During his tenure as Coordinator, Matt has had the opportunity to work with 11 National Championship teams (most recently the 2016 Men’s Lacrosse National Champions), 8 individual National Championship athletes, and over 225 All-Americans.  In 2016, Matt was a finalist (Top 3) for the NSCA College Strength Coach of the Year award given annually to the top strength coach across NCAA DI, DII, DIII, and NAIA divisions. Since 2004, he has been certified as a Certified Strength & Conditioning Specialist (CSCS) by the National Strength and Conditioning Association (NSCA) and most recently, has garnered the distinction of a Registered Strength & Conditioning Coach (RSCC*D). Matt also serves on the NSCA Advisory Board for the State of Delaware. While not training athletes, Matt manages all indoor recreational facilities and serves as an Adjunct Instructor in the  Exercise Science and Applied Health Physiology Departments at Salisbury University. Alongside his brother Brad, he is the co-creator and writer for the blog, EducatedCoaches.com. This informational blog is dedicated to enhancing the experiences that coaches, parents, and athletes have while participating in sports.